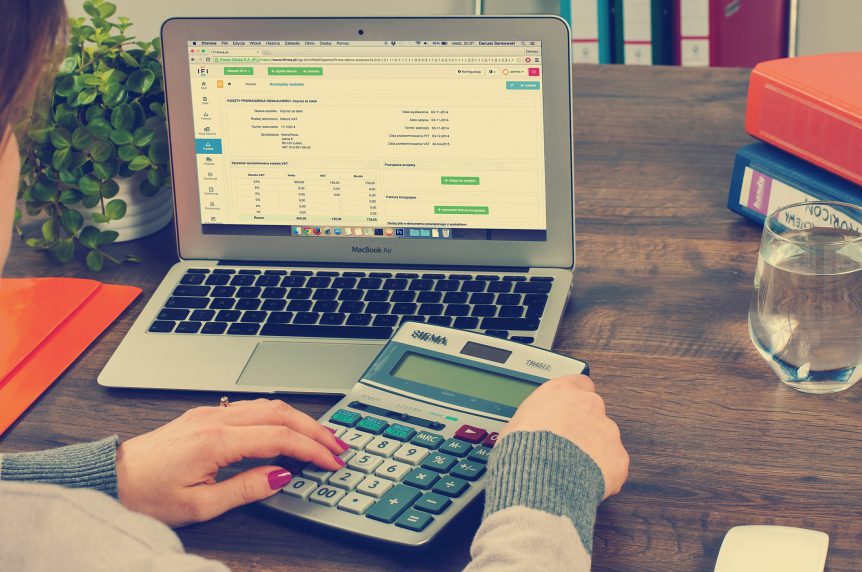 Ben Franklin once said, “…in this world, nothing is certain but death and taxes.” Ben Franklin also said, “Beer is proof that God loves us and wants us to be happy.” Ben Franklin was a smart man. Let’s hold off on the beer quote for now, although I would love to talk on that point at our next cocktail reception, at length.

In this blog post we are going to talk about taxes, specifically federal income tax. Federal income tax was first introduced in 1861 by President Lincoln. It was a 3% tax imposed on all annual incomes over $800. (From here on out, in this post I will be referring to the highest marginal rate).

You should note that the chart does not show 2018’s rate of 37%. So there have only been three times in the history of the United States of America’s Federal Income Tax when the highest marginal rate was lower than it is right now. I have bolded that previous sentence because I want you to read it again. Let’s look at those three periods of time.

1988-1992, 28%-31%: The President Bush Tax Cuts. By eliminating loopholes, implementing a corporate tax rate for “bubble rates,” and getting rid of certain shelters, the George H.W. Bush administration actually increased existing tax revenue by about 4%. What happened next? The Clinton administration raised the rate to 39.6%

2003-2010, 35%: Turbulent times. President George W. Bush came into office right as the tech bubble was popping. He then lowered the tax rate to 35%, expiring in 2010. What then? President Obama passed the Tax Relief Act keeping the 35% for a few more years before incrementally increasing it back to 39.6%.

So where do you think taxes are going? And what do we do with this information? Let’s think about how our retirement assets are taxed. We have three different “buckets.” The one most commonly used for retirement savings is the tax-deferred bucket. This would be your traditional IRA’s, 401(k) plans, TSP plans, 403(b) plans, and annuities. We put money in without paying taxes on our contributions or earnings, and it is taxed at ordinary income rates when we pull it out. It will count towards your AGI and impact how your Social Security is taxed. The other thing to note, in regards to the chart above: we are at nearly historically low income tax rates now. Why would we not take advantage of that?

Probably the least common of the tax buckets would be the taxable bucket. In this bucket, we put in after-tax money and we are taxed, at capital gains rate, on the earnings when we sell an investment. We are also able to write-off the losses, up to a certain amount each year. And as the below chart indicates, like income taxes, the long-term capital gains tax has only been lower than it is right now at three times in its history. So, again, where do you think capital gains rates are going? 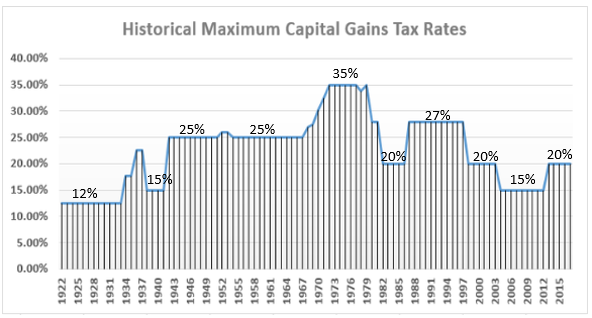 The most under-utilized tax “bucket” is the tax-free bucket. There are a number of different ways to save into this bucket; we will about three. The first I will touch on are municipal bonds. These are complex vehicles where the gains and income from the bonds CAN be tax-free; however, there are also certain circumstances when you will have to pay tax on these investments. They also have the same risks as any other bond. Interest rate risk, inflation risk, market risk, and credit risk. The most popular tax-free vehicle is the Roth IRA. This is an account that can hold different types of investments. All money goes in after you have paid income tax, and the earnings grow tax-free and are withdrawn tax-free. They do not count towards your income, so they will not affect how your Social Security is taxed. There is a catch to Roth IRA’s: there are contribution limitations based on income. There are also contributions limits each year. 2018’s limit is $5,500 for anyone under 50 years of age, and $6,500 for anyone over 50 who has not maxed out their contribution in every year eligible prior to age 50. This is a fairly low amount to contribute each year when trying to accumulate enough assets to fund your retirement.

The good news? There is an alternative to accumulating your tax-free assets. An indexed universal life policy can be a great way to accumulate tax-free assets. While life insurance policies need to be opened with the primary goal of life insurance, they have a number of different benefits built into the indexed universal life policies. A lot of the benefits are living benefits, including tax-free income, LTC benefits, and access to the cash value. There are no contribution limits, although you need to be careful not to create a Modified Endowment Contract (MEC), as this will bring taxes to your otherwise tax-free benefits.

We all know these benefits exist. But what does it mean for you? Let’s take a look at an example policy, because, in my opinion, not enough advisors know how much income these IUL policies can produce and how impactful the tax benefits can be.

Let’s quickly assume this client makes $166,000/year right now. They are in the 24% tax bracket, if married. In today’s dollars they would receive approximately $3,030/month from Social Security at age 67. Pair that with the IUL policy, and they can have $113,179/year in income, putting them in the current tax bracket of 22%. However, because $76,819 is tax-free and doesn’t count as income according to the IRS, they would only be subject to the 12% tax bracket (today’s tax brackets). Quite the tax savings if you ask me.

For more info on Indexed Universal Life policies and to learn how to write $100,000 in target life premium on your existing book of business, join us at our All-Pro Training Academy. Register at: www.tarkentonacademy.com or call Tyler Schmidt at 800-659-4942.